Start a Wiki
Art Museum of Juliana (Museo d'arte di Juliana/Muzej umetnosti Julianske) is a popular museum in Juliana, in Barbieri, Pisona. The museum itself has existed since 1956, but its current building was built in 2009.

The museum was created in 1956 with the paintings of the Royal Family. Many were given back to them in the 1980s but lots stayed in the museum. Since 1980 they have gotten a lot of modern paintings.

The museum has five levels. The basement has parking and a restaurant, the two first floors are classic art and the top levels are modern art.

Distribution of Alms and Death of Ananias, Masaccio

Venus at her Toilette, Paolo Veronese

The Virgin and Child, Antonius Hasselman 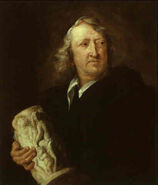 Portrait of Gerard van Opstal with ivory sculpture, Lucas Franchoys the Younger
Add a photo to this gallery

The Smoker, Vladimir Krešić
Add a photo to this gallery
Retrieved from "https://wikijuliana.fandom.com/wiki/Art_Museum_of_Juliana?oldid=5692"
Community content is available under CC-BY-SA unless otherwise noted.